The New York Times > The Hague Journal: 2 Dutch Deputies on the Run, From Jihad Death Threats 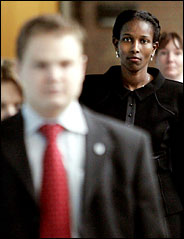 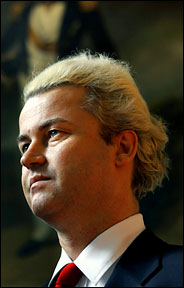 THE HAGUE – Every evening, plainclothes police officers escort two members of the Dutch Parliament to armored cars and take them to hiding places for the night. One of them, Geert Wilders, has been camping out in a cell in a high-security prison where his life, he said, has become “like a bad B-movie.” His colleague, Ayaan Hirsi Ali, has grown increasingly miserable sleeping on a military base.

The special treatment would certainly seem warranted: both have received a deluge of death threats since they strongly criticized the behavior of militant Muslim immigrants in the Netherlands.

After two previous political assassinations, Dutch officials are taking the threats seriously, treating the safety of the two lawmakers both as a matter of personal protection and as an issue of national security. Several politicians have said that in the country’s present polarized mood, public violence could erupt if either of the two were killed.

But the two legislators themselves have disturbed the officials’ plans, choosing to reveal their whereabouts to protest the conditions under which they live. Neither has had a permanent home since November, when a filmmaker, Theo van Gogh, was shot and knifed to death on an Amsterdam street. A 26-year-old Dutch-Moroccan, Muhammad Bouyeri, has been charged with the murder.

The decision by Mr. Wilders and Ms. Hirsi Ali to reveal their secret lives, one in a jail cell, the other on a naval base, has raised a question that is troubling many Dutch: is it acceptable for legislators in a Western democracy to be forced to go into hiding, to live like fugitives on the run in their own land?

“Of course this is an outrage,” said Abram de Swaan, a prominent sociologist. “It’s not bearable. The government must come up with better solutions, like putting them in protected homes. That’s the way it happens in other countries.”

The NRC Handelsblad, a leading daily newspaper, ran an editorial recently headlined “Unacceptable.” A situation in which legislators are “hampered in carrying out their tasks puts democracy in question and makes terror successful,” it said, adding that the official bureaucracy evidently “does not know how to deal with the new reality” in which Muslim terrorism may also threaten Dutch politicians.

Officials point out that the government is prosecuting several men for death threats and has adopted tough laws against terrorism suspects, including voiding their Dutch nationality. Late last month the Justice Ministry announced that it planned to expel three Muslim preachers for spreading radical Islamic ideology at a mosque in the city of Eindhoven.

Mr. Wilders’s isolation becomes quickly evident on a visit to his closely guarded office in the attic of the Dutch Parliament. In his small, windowless room, far from his colleagues, he can receive visitors only if they are carefully screened and escorted at all times.

He no longer answers his own telephone, but the threats keep showing up in his e-mail, in Internet chat rooms and Web logs. Offering some samples, he switched on his office computer and a short video appeared, featuring his photograph, the sound of gunfire over Arab music and a voice that said, “He is an enemy of Islam and should be beheaded.”

“The people who threaten us are walking around free and we are the captives,” Mr. Wilders said. The government has told him that he will have to wait until September for a secure home. Until then, he said, he presumably has to continue his spartan life, sleeping in a cell at Camp Zeist, deprived of family and friends. The security detail schedules weekly private meetings with his wife.

Mr. Wilders, a rising right-wing politician, feels an affinity with neoconservatives in Washington and recently visited the United States “to gather ideas.” He contends that Islamic dogmas and democracy are incompatible, and has called for a five-year halt to “third world immigration,” the closing of radical mosques in the Netherlands and the preventive arrest of terrorist suspects, whom he has labeled “Islamo-fascist thugs.”

It was Ms. Hirsi Ali, though, who first decided to go public with her own and Mr. Wilders’s hiding places, out of frustration at the government’s seeming foot-dragging over finding appropriate housing. Her own proposals were regularly rejected as unsafe, she said.

Her bodyguards, she said, have deposited her on many weeknights on a naval base in Amsterdam, or hustled her off to sleep in different hotels. “They are keeping me alive, but I cannot concentrate on my work,” she said. “I need a place where I have my desk, my books, my papers, a home where I can meet with people.” In the past year, her handlers have twice taken her secretly to the United States

Ms. Hirsi Ali, a Somali-born refugee who arrived in the Netherlands in 1992 and became a member of Parliament in 2003, was under police protection even before the murder of Mr. Van Gogh, with whom she had made a short television film that denounced violence against Muslim women. Some Muslims found this deeply offensive.

The Dutch government pressed Ms. Hirsi Ali to go abroad for two months after Mr. Van Gogh was killed and a letter was found on his body threatening her. When she returned to Parliament in January, she was warmly received by her colleagues. But the pressures continue.

The wife of an Islamist militant who is in police custody told a local newspaper that Ms. Hirsi Ali, a former Muslim, would be slain by Muslim women. That would make more impact than being punished by a man, the woman said. “The sisters are patient,” the woman said. They will wait, “even if it takes 10 years.”

Ms. Hirsi Ali concedes she is struggling with the question of how long she can continue in politics, denouncing what she regards as the excesses of Islam. In the past she has shown she is not easily cowed, but she said a deep fatigue was setting in. “I am willing to sacrifice a great deal, but I don’t know if I can live like this for a lot longer.” She put her inexorable quandary this way, “The real problem is, I cannot stop because that will only serve and stimulate the terrorists.”