Usually I don’t ‘do’ these kind of stories, but because I have worked with Mohammed Allach for a short time, I couldn’t resist it. He used to work in Gouda at the Nour mosque where I did my research and then left for another goal in his life: playing professional football. He hasn’t forgotten his involvement in social issues: BBC NEWS | Programmes | This World | Love bridges Dutch racial divide 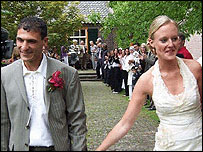 In the famously tolerant Netherlands a multicultural wedding should not be anything exceptional, but as Mohammed and Sanne will tell you, things are not what they used to be.

“The killing of Van Gogh made a big impact on me,” says Mohammed, who is of Moroccan descent but was born in the Netherlands.

“For the first time, I didn’t feel at home here. It was really frightening.

“I got e-mails from Muslim women who’d been spat at in markets, even beaten. Their children too.”

One million of the Netherlands’ 16 million people are Muslim. Mohammed says that their further integration into Dutch society is the only way out of the current crisis.

“The Dutch should give young Moroccans better opportunities,” he says, but acknowledges that Moroccans too have to try harder.

Sanne quit her job as a marketing manager to run Mohammed’s foundation.

“It’s all a matter of engaging with each other,” says Sanne.

“Once you actually talk to Muslims, you’ll find often their values are pretty similar to ours.”

But it is a message that many Dutch are sceptical about.

At a party with Sanne’s former work colleagues the conversation is jolly until it turns to the issue of immigration.

“I have a friend at an employment agency,” says Sanne’s friend Els. “She tells me she’ll hire 100 Turks for factory work, but never Moroccans, because they are all lazy.”

“And what about the prisons?” asks another colleague. “All the inmates are dark skinned. I am not saying they are all Moroccans, but …”

A third colleague jumps in. “Most crimes are committed by Moroccans, that’s a fact.”

One issue that deeply worries the Dutch is the rise in Islamic fundamentalism.

It is close to home for Sanne and Mohammed.

Sanne’s sister Marlou was a teacher at an Islamic primary school five years ago when during a lesson a nine-year-old Muslim boy announced that he wanted to become a jet pilot “to bomb the Jews”.

It turned out that the boy had been shown a Hamas propaganda video during religion classes.

Meanwhile Mo’s team Venlo is doing well in the league.

They have secured a spot in the play-offs for promotion to the premiership.

The fans are happy, chanting “Allach is great, ole, ole!”

But Mohammed says that recent events have also led to serious racial abuse against Muslim footballers – including the use of an obscene term coined by Van Gogh himself.

“It’s all connected to what’s going on in the world,” says Mohammed. “It started with 9/11, then the Van Gogh killing. Islam is the subject.”

“Mixed emotions,” he says. “We did well in the league but not the play-offs.

“I am sad now, but in two days time I’ll be the happiest guy on earth.”

The wedding is exactly what Mo and Sanne had hoped for: multicultural, relaxed, everyone having fun.

The mayor says that seeing this young mixed couple get married fills him with hope for the future of the Netherlands.