From postering activists to virtual cyber art. Forty years of art history are on display in Rebelle. This exhibition – whose name is derived from French artist Gina Pane’s (1939-1990) installation ‘Mots de mur‘ (1984-85) – focuses on works by female artists who are or have been greatly inspired by feminism. According to the press statement, while the topic of art and feminism has both champions and opponents, everyone is in agreement about one thing: feminism permanently changed the artistic landscape.

Recent exhibitions in MOCA, Los Angeles and the Brooklyn Museum in New York, amongst other institutions, reveal a renewed interest in art with a feminist slant. What does this theme mean for young female artists?And how did it inspire the work of earlier generations of female artists? The MMKA (Museum of Modern Art Arnhem) offers a major survey of works by eighty female artists revealing similarities and differences between generations and cultures: from American pioneers like Faith Ringgold and Eastern and Western European pioneers like Ewa Partum, Nil Yalter, Gülsün Karamustafa, Kirsten Justesen and Ulrike Rosenbach, to contemporary female artists from Africa, the Middle East, Asia, and the Netherlands.

According to the museum, the exhibition Rebelle reveals that feminist art is not about any single style or particular subject. Topics such as desire, the body, memory, masculinity, and social critique are explored. In addition, the exhibition focuses on female artists who stretch the concept of art in how they work – by collaborating with others, for example, or by using new media.  Newspaper clippings, documentaries and photos add another layer to Rebelle. The art is placed in the context of important social developments, the changing position of women, and ‘action’ and intervention in the art world in particular.

In 1969, the first meeting of Women Artists in Revolution (WAR) took
place in America. WAR soon organized protests against the exclusion of female and black artists, for instance, on the sidewalk in front of the Whitney Museum in New York. In the Netherlands as Kirsten Justesen tells us, the activist group Dolle Mina was started in 1969. The Stichting Vrouwen in de Beeldende Kunst (Women in the Visual Arts Organization), established in 1977, protested on the sidewalk in front of Amsterdam’s Stedelijk Museum that same year against the under-representation of female artists. The protestors held signs with the punning text “het zit wel snor hier” – a Dutch expression meaning all is well, but using the word “snor” which is Dutch for moustache. In 1978 and 1979 the two-part exhibition Feminist Art International was organized; it would stir emotions for years to come.

According to Justesen, drawing attention to the exclusion of female and non-western artists in public collections, exhibitions, and publications is only one aspect of the theme of art and feminism. Art itself, its societal role and so-called objective criteria of quality, are up for discussion as well. In the 1970s, the hierarchical distinctions between classical disciplines like painting and sculpture and newer forms like performance and video art were sharply defined. The same was true for the precarious distinction between what subjects could and couldn’t be used for art. Many female artists explored topics that had previously not been considered appropriate for great art, such as unequal relationships between men and women, violence and stereotypes, sexuality, identity, and the body. It is no coincidence that the slogan “the personal is political” has become so important. Female artists, in particular, investigated and experimented with a visual language that they saw as “their own” and original, and thus not influenced by “masculine” norms and views.

The exhibition rebelle brings together work from different generations and parts of the world. The South African Berni Searle (1964) who often uses natural pigments and changes the color of her skin with them – recalling the spice trade and colonization – is, for example, influenced by Cuban American Ana Mendieta’s (1948-1985) “earth prints.” The Guatemalan Regina Galindo (1974) belongs to a generation of performance artists that use their bodies to question chaos and violence in their societies. Her work recalls that of Gina Pane.

2009 is a year of looking back: Rebelle offers viewers the opportunity to look again at feminist art, freed from the cliches of pink overalls and easy dismissals (“damn anachronism”) that have clouded its representation over the past decades. Here the way is opened to fresh interpretations of art and its global implications.

In the context of this blog, particularly interesting are contributions from Middle Eastern feminist artists. Take for example Shadi Ghadirian whose contribution at first sight may seem to critique the alledged oppression of Muslim women: 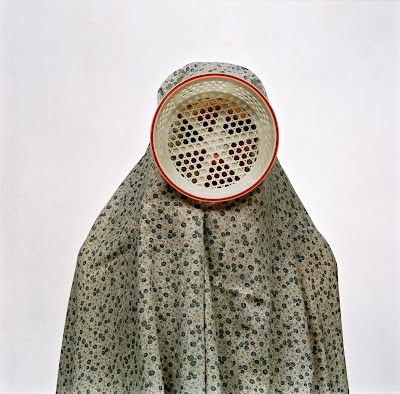 The series ‘Like Everyday (Domestic Life)’, presents women entirely veiled, the face hidden behind assorted items of kitchenware. Ghadirian warns against a too literal reading of these images, and underscores that the theme woman-object unfortunately has a universal dimension. Another contribution is Karamustafa’s video-installation “The City and the Secret Panther Fashion“. It gives you a look inside a secretly blooming Panther Fashion in Istanbul.

“…brings forth the arguments about the outlooks, especially the crucial debates about the ‘women’s body’, whether it should be covered or not or the other ethic problems related to it, on my side of the world. It is a ‘tragicomic fiction’ about lives of women who are pushed to live a secret life from 9 to 5, a limited days time that they can spare for themselves. On the other hand side the viewer is free to interpret the film in every aspect that ‘Panther Fashion’ may associate.”

The story is about the meeting of 3 women who wish to join the “secret panther fashion”-movement, which spreads quickly through the city. As their intentions are a bit illegal, they are anxious that somebody may spy on them while walking to the house where they can taste the joy of wearing freely the “Panther Design” dresses and spend a time of their own away from all dangers. 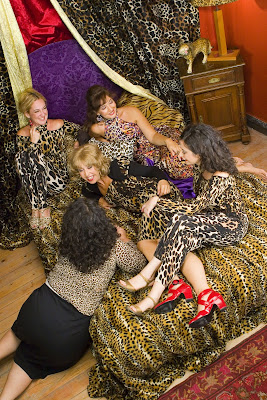 G. Karamustafa - The City And The Secret Panther Fashion, 2007, video

Only those who know the secret codes are allowed to enter the house which is decorated entirely in “Panther Fashion”, can enjoy the outfits and spend a friendly and fantastic time.

“In the house waits Panterella, the fearless housekeeper and her college who would offer them their endless freedom withwearing what they want. At the end of the day they leave the house in secret, again with the fear of being caught and return to their colourless lives.”

The third contribution is from Iranian Parastou Forouhar. Her ‘wallpaper’ Thousand and One Day, looks purely decorative based upon traditional Persian miniature painting. 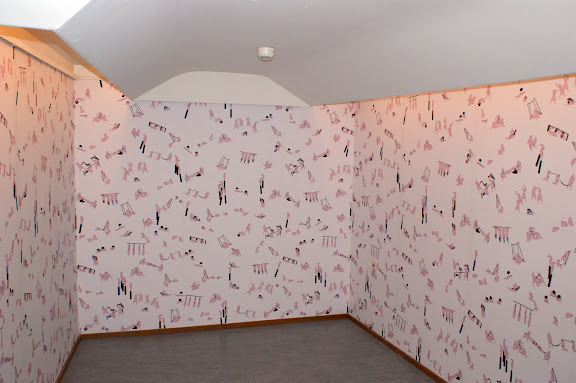 Parastou Forouhar - Thousand and one day, 2003

At closer inspection however the wallpaper is composed of scenes of torture. Anonymous, faceless individuals are being tortured by anonymous, faceless men, only the weapons and methods of torture and killing are very clear. Knowing that Parastou’s parents were killed by Iranian secret agents makes the scenery even more hard hitting.

I’m not an art expert so I don’t know how progressive or new these (forms of) arts are. All three, but also other contributions to this exhibition try to engage in some sort of protest against oppression of women by…whoever. Must be said that in fact the contributions from the three women discussed here are the most rebellious of all and have strong and indeed hard hitting protests. What does this mean? Does it mean that ‘Western’ feminists are less engaged in fighting oppression, that the battle for them is done? And that only Middle Eastern feminists still have to fight and therefore they are the ones still being oppressed? This is of course too simple (note that there are contributions in the exhibition from Latin America, Asia and Africa as well), but the question what is feminism, or what are feminisms about these days is a relevant one I guess. Also what can be said about some sort of solidarity or influences from feminists throughout the world. Is it there? Is it in fact necessary? What I do know is that it is time for an exhibition in the Netherlands of feminist art from the Middle East and other non-Western countries or migrant women from the Netherlands.

What also struck me in the themes of the exhibition and more in particular of the Middle Eastern artists is the protest not only against oppression by political and/or religious elites, or men in general, but also the attempt to escape the routines of every day life that hold people (women in particular?) in some kind of straight jacket. It struck me because I just finished a conversation with two young (salafi) women who want nothing more than just that:

‘you may find it boring, you may even find it unattractive, but all I want is just a simple, normal life, having a nice husband, kids, be a mother and to be out of the thread mill of having to perform, having to be faster and faster, having to explain yourself.’

Can we also see that as a form of feminism, in the form of protest against a capitalist society or a society that keeps bothering Muslim women with their beliefs and practices?