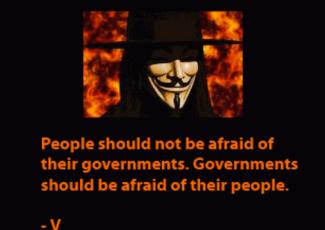 In the summer of 2010 the youth of Facebook, “shebab al-Facebook,” began a campaign of peaceful civil disobedience through the Arabic “We are all Khaled Said” Facebook Fan Page. The success of their “silent stands” throughout the country gave youth a media friendly face as a group that espouses peaceful non-violent forms of civil disobedience to confront oppression and tyranny. The inspiration for the peaceful side of the movement was derived from divergent sources. Analysts writing in the western press were keen to point out the influence from celebrated figures and icons of nonviolence like Gandhi, Martin Luther King, and Gene Sharp and the human rights orientation of the cause. [1] The reputation the youth garnered as deft in nonviolent civil disobedience was well deserved and the silent stands were a feat of group solidarity, DIY youth activism, and the art of on-line to off-line mobilization. [2] But in actuality the youth movement has moved on multiple fronts and employed diverse strategies. The page itself vacillates between using bellicose language and images when talking about the objects of their rage — for example, the police and Interior Ministry — to instructing the community on non-violent peaceful strategies. The two approaches coexist in a symbiotic relation. On the flip side of any mask of peace is often a mask of menace. 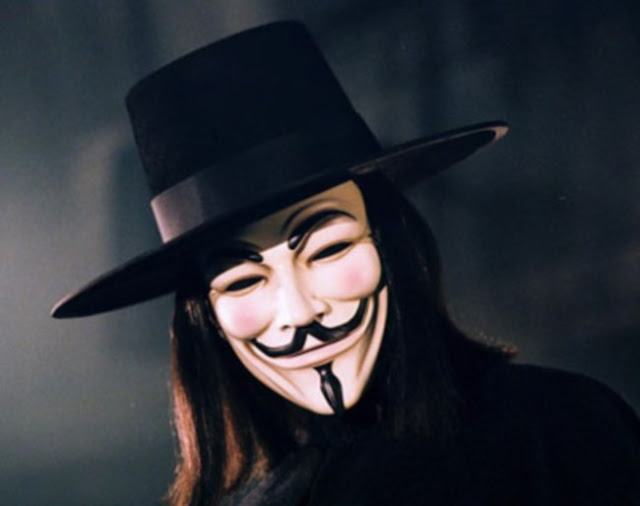 The Guy Fawkes mask lifted from the comic book series and film V for Vendetta has been a staple of the page and the movement from the start. V for Vendetta enjoys cult status among certain segments of shebab al-Facebook who fall under the rubric of leftists, anarchists, Mohamed el Baradei supporters, Islamists, post-Islamists — which are by no means mutually exclusive categories. The potent imagery and eminently quotable lines from the film permeate individual Facebook pages and the “We are all Khaled Said” Facebook Fan Page as posts, threads, cartoons, video links, and wall photos. 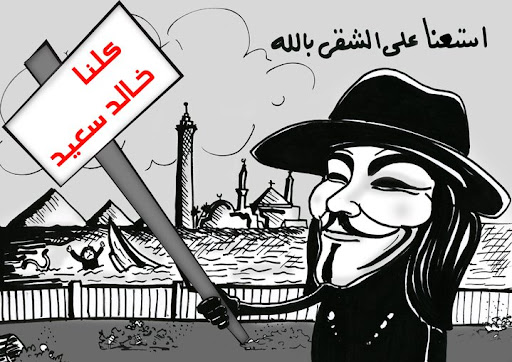 Cartoon posted on Arabic "We are All Khaled Said" Wall on July 29, 2010. The text reads: "We seek God's aid against misery."

The film, written and directed by Andy and Larry Wachowski and adapted from the comic book characters created by Alan Moore and David Lloyd, is set in a dystopian future that is a totalitarian Britain. The story serves as a warning to governments not to push their people too far and is a reminder to people of the formidable power they possess if they know how to harness it. The antihero, V, whose name stands for vendetta, vengeance, victim, villain, victory, violence, and “vestige of the vox populi,” also denotes “veritas,” truth. V survives a personal ordeal of captivity and torture and dedicates his life to taking revenge on his captors and awakening his fellow citizens to their oppression. He uses the mass broadcast system, the state’s propaganda machinery, to transmit his message. He proclaims:

“[T]he truth is, there is something terribly wrong with this country, isn’t there? Cruelty and injustice . . . intolerance and oppression. And where once you had the freedom to object, to think and speak as you saw fit, you now have censors and systems of surveillance, coercing your conformity and soliciting your submission. How did this happen? Who’s to blame? Well certainly there are those who are more responsible than others, and they will be held accountable. But again, truth be told . . . if you’re looking for the guilty, you need only look into a mirror.”

“I know why you did it. I know you were afraid. Who wouldn’t be? War. Terror. Disease. There were a myriad of problems which conspired to corrupt your reason and rob you of your common sense. Fear got the best of you and in your panic, you turned to the now High Chancellor Adam Sutler. He promised you order. He promised you peace. And all he demanded in return was your silent, obedient consent. Last night, I sought to end that silence. Last night, I destroyed the Old Bailey to remind this country of what it has forgotten. More than four hundred years ago, a great citizen [Guy Fawkes] wished to embed the fifth of November forever in our memory. His hope was to remind the world that fairness, justice and freedom are more than words — they are perspectives.”

V not only speaks the truth about the complicity of individuals in perpetuating the system, but makes them aware that they hold the power to overturn it. He declares to his fellow citizens:

“You are but a single individual. How can you possible make any difference? Individuals have no power in this modern world. That is what you’ve been taught because that is what they need you to believe. But it is not true. This is why they are afraid and the reason that I am here: to remind you that it is individuals who always hold the power. The real power. Individuals like me. And individuals like you.”

On June 14, 2010, eight days after Khaled Said’s killing at the hands of two officers, a short film, “Khaled for Vendetta,” was uploaded to YouTube with links to it on the Facebook page. A second film, “Khaled Vendetta,” followed on July 29, 2010.
[youtube:http://www.youtube.com/watch?v=jacu41WDFto]
The five-minute film “Khaled for Vendetta,” written and directed by Mohamed Elm elhoda (Matrix2008 studio), masterfully draws out the parallels between the totalitarian society in V for Vendetta and Egypt under Emergency Law.

The film opens with ominous music from V for Vendetta followed by a fade in and out of Khaled’s image over a black backdrop. The shot cuts to the Peoples Assembly (Majlis al-Sha`ab) session of May 11, 2010, with the then Prime Minister, Ahmed Nazif, announcing the renewal of Emergency Law for two more years. He declares it will be used only to confront drugs and terrorism. Members of parliament applaud. The words “drugs and terrorism” are repeated over and over.

V sets down the first domino.

The next scene opens with a homemade film of a smiling Khaled in what appears to be his bedroom, followed by the now infamous photo taken at the morgue of his mangled face. A text states that Khaled Said was beaten by two plainclothes police under the auspices of the Emergency Law.

The shot moves to a scene from the original film, a conversation between two police investigators about how everything is connected:

Dominic: So do you know what’s gonna happen?

Finch: No. It was a feeling. But I can guess. With so much chaos, someone will do something stupid. And when they do, things will turn nasty. And then, Sutler [the leader] will be forced do the only thing he knows how to do. At which point, all V needs to do is keep his word. And then . . .

In the meantime V is setting up an elaborate pattern of dominos in the shape of an encircled “V.” He flicks the first domino and it sets off scenes of violence, chaos, destruction, fire, protests, shouting, upheaval.

The film ends with two still images. The first is of police in disproportionate numbers surrounding a small group of demonstrators. The second and final image is of the people outnumbering and surrounding the police. This closing image no doubt conveys the famous dictum from the film, “People should not be afraid of their governments. Governments should be afraid of their people.”

In June of 2010, after the film was uploaded, a handful of viewers posted comments which are revealing of the movement within a movement.

“Brilliant video . . . Maybe Dr.El Baradei will be our “v” here in Egypt to save? us . . . I recommend this movie for everyone, it is like a mirror to the current situation here in Egypt . . . God bless you”

“It brought the tears to my eyes? I can see it all coming soon isa? [inshaallah] it’s not khaled for vendetta anymore . . . it’s? Egypt for vendetta thnx mohamed for that awesome video”

With the fall of Tunisian President Zine El Abidine Ben Ali on January 14, 2011, an image that immediately started circulating on Facebook was that of a masked man in the foreground of Tunisia’s flag. As Egyptians prepared for their own revolution, the simple image of the masked V made the rounds. 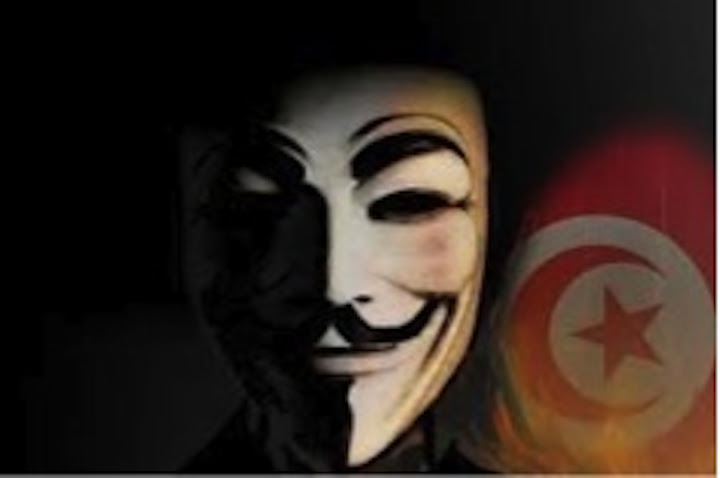 The appearance of this mask signaled that shebab al-Facebook were becoming restless. Their strategy of silence, even a deafening silence, was perceived as no longer enough to achieve the kind of political change they anxiously desired. And change they got.

In this post-revolution, post-Mubarak period, the mask and spirit of V have been more of less dormant. If events take a turn for the worse, if the crackdown from the military becomes unbearable or a dreaded counterrevolution occurs, V may very well resurface. But for now this seems unlikely, as youth are working in coalitions to develop civil political strategies to meet the changing circumstances. They are making some inroads as they press for democratic change, for working towards the realization of a society that affords people dignity and livelihoods. Yet so much remains unclear. What is certain is that the idea for change has been firmly planted and cannot be eradicated. Ideas after all, as V proclaims, are bulletproof. The struggle continues.

[2] For more on the silent stands see the excellent articles by Nadine Wahab and Adel Iskandar.

Linda Herrera is a social anthropologist with expertise in comparative and international education. She has lived in Egypt and conducted research on youth cultures and educational change in Egypt and the wider Middle East for over two decades. She is currently Associate Professor, Department of Education Policy, Organization and Leadership, University of Illinois at Urbana-Champaign. She is co-editor with A. Bayat of the volume Being Young and Muslim: New Cultural Politics in the Global North and South, published by Oxford University Press (2010).

This is article also appears on Jadaliyya.com. Other articles by Linda Herrera on Closer are:
Two Faces of Revolution
Egypt’s Revolution 2.0 – The Facebook Factor

One thought on “"V for Vendetta": The Other Face of Egypt's Youth Movement”