Yesterday there was the international support day for Sunni Muslims in Iraq and, basically, a support day for rebels of ISIS. In the days leading up to this event there was a public outcry about the plan of Dutch ISIS supporters to organize a demonstration in The Hague in support for the Sunni Muslims in Iraq. Given the fact that the idea was announced on a Dutch Facebook site supporting the Dutch foreign fighters in Syria it wasn’t very suprising to see it framed immediately as a pro-ISIS demonstration by Dutch weblog Geenstijl and several opinion leaders and politicians. 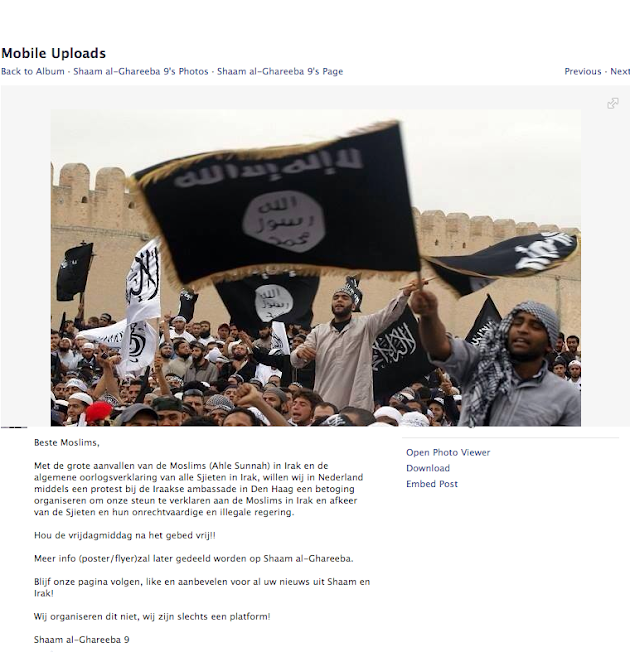 Note: I have deleted people’s comments in order to protect their privacy.

My translation of the message:

With the major attacks of the Muslims (Ahle Sunnah) in Iraq and the general declaration of war by all Shiites in Iraq, we want to organize a demonstration in order to declare our support to the Muslims in Irak and our disavowal (afkeer) of Shiites and their unjust and illegal government.

More info (poster/flyer) will be shared on Shaam Al-Ghareeba.

Keep following our page, liking and sharing for all your news from Shaam and Iraq.

We do not organize this, we are only a platform

The Christian Democrats (CDA) and orthodox Christians of the ChristenUnie appealed in parliament to forbid this demonstration which according to them would be possible since the UN has officially categorized ISIS as a terrorist organization. According to minister Timmermans however sympathizing with a terrororganisation does not make a person guilty of terrorist activities and people have the right to demonstrate. The mayor of Den Haag, Van Aartsen (allowing or banning a demonstration is a local decision) stated however that he did not say any legal grounds for banning the demonstration in advance. He also stated that there will be strict conditions among others pertaining to unlawful expressions such as calling for violence and strict surveillance by the police. The embassador of Iraq wanted a ban anyway and stated the demonstration was a provocation for Iraqi’s in the Netherlands and Van Aartsen allowing the demonstration was incomprehensible and it will taint the image of the Netherlands abroad. He also feared clashes between protesters and counter-protesters.

The reactions among Muslims were mixed. Some fully supported the demonstration but many Muslims were angry that people were supporting a ‘terrorist’ organizations. Most reactions I saw however were not so outspoken. People supported ISIS fighting against ‘shiite oppression’ of Sunni Muslims but rejected ISIS’ practices mass executions and their interpretation and implementation of a sharia penal system.

On Wednesday the Dutch website De Ware Religie (the true religion), which functions as a spokesperson for Dutch foreign fighters in Syria, announced the demonstration was cancelled. The victory of ISIS in Mosul and its subsequent showcasing of mass executions appears to given rise to a new sense of urgency among policymakers, politicians and opinion makers to do something against the Dutch foreign fighters and their support base in the Netherlands. Several people did join the online campaigns. Here a short overview and in a few cases I have put some additional info below the example.

[View the story “Dutch eyes on ISIS” on Storify]

There have been a few people asking Muslims to speak out against ISIS and to show where their loyalty is. This is always a dangerous thing as it enhances the us vs. them rhetoric and turns Muslims into terrorists by association or lack of visible disassociation. For the pro ISIS activists these calls are again a sign of the hypocrisy of democrats as they themselves never condemned violence against Sunni Muslims by the Iraqi government.

The calls for public disassociation are part of what I have called the regime of surveillance whereby Muslims are encouraged to enact the accepted and expected models of the Dutch secular liberal citizen. Taken together we can regard the public debates on Islam, the policies regarding Muslims, integration and security politics (often leading to more debate and policies) as a surveillance of the everyday lives of Muslims. The debates about (radical) Islam and the counter-radicalization policies have influenced Muslims’ lives severely. In the Netherlands, several studies have explored how particular debates on Islam trickle down into the daily lives of people in a variety of ways ranging from people’s experiences in schools, workplaces and, of course, their media-consumption at different levels in society.