Dutch campaign against discrimination - Uploaded by Niriel on Flickr

Muslimah Media Watch (note to my regular readers: if you still have not checked that site, it is about time you did!) noticed the poster displayed above on Flickr.
Hide No More: Dutch Ad Campaign Targets Discrimination Against Hijabis « Muslimah Media Watch

The poster appears at bus stops, and says “Do you have to let yourself at home when going out?” At first, I was confused by what the poster meant. Was it saying that Muslim women who cover were hiding themselves or that Dutch society was making hijabis leave a part of their selves at home by pressuring them not to cover?
After clicking on the link in the Flickr page where I saw the image of the poster, I concluded it was the latter.

[…]Seeing an anti-discrimination ad campaign in the Netherlands featuring a Muslim woman is heartening to say the least, because it shows an attempt to truly embrace the diversity that exists in the Netherlands.

[…]
The second reason why I love this image is because it completely reverses the looker’s expectation of hijab. Instead of the hijab hiding some aspect of the woman, it is society’s pressure for conformity that is making the woman hide an aspect of herself.

According to the website, discriminatie.nl (discrimination) that features the campaign

The Netherlands is a country where no one has to hide their own self. It is a place where no judgement is given about people’s skincolour, handicap, age or sexual preference. Everyone should be able to him/herself and to feel at home. In order to protect that, there are rules we have to abide by. Namely, that everyone in the Netherlands should be treated equally. That discrimination based upon religion, worldview, political conviction, race, gender or on whatever ground, is not allowed. Because in the Netherlands everyone is allowed to show his or hers own self everywhere. 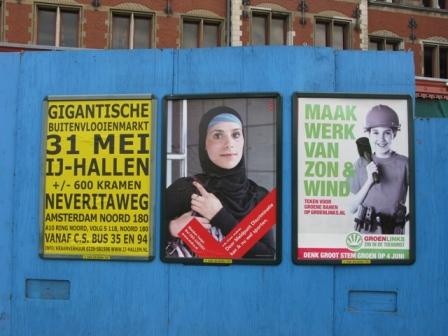 Discriminatie.nl a non-governemental webportal set up by several anti-discrimination offices and funded by the Dutch state. There are more of such campaigns in the Netherlands such as the one as former Canadian blogger S. mentioned to me in an email she send me:

The poster in the middle is from the Discrimination Complaints Office for the Amsterdam Region (Meldpunt Discriminatie Regio Amsterdam -MDRA). The text on left side:
Melden helpt! = Reporting (filing a complaint) helps!
then the phone number and the website

The text on the right side is from 23 year old student Leila:
Door Meldpunt Discriminatie kan ik nu wel sporten – Because of the Discrimination Complaints Office I can play sports now

It refers to incident in Rotterdam (and several other cities) were girls/women were banned from a gym (called Fit for free) because they wanted to wear the headscarf at the gym (which does not mean the girl on the poster was involved although she is not a model dressing up as a Muslim woman – something they do sometimes in commercial ads – but indeed a student from, I think, the Free University Amsterdam). You can read about the issue here. Besides the complaint, this particular incident by the way also resulted in the establishment of a pressure group called Ontsluiert (Unveiled/unveiling also (fig.): reveals) that called for a boycott against the all the local gyms of Fit for free.

Discriminatie.nl is a similar (but national) complaints office. The campaign text of Discriminatie.nl can be seen not only as an attempt to establish or restore the image of a society in which in toleration is part of the national identity, but also as a call to act upon it and resist intolerant actions of people. In that sense the comment at MMW is almost the opposite of the comment at the flickr site where we can find the picture (and to which MMW refers to):
Dutch campaign against discrimination on Flickr – Photo Sharing!

I understood it completely wrong when I saw it first. I thought it meant that you shouldn’t hide yourself under a tent in the middle of summer just because the men of your family have made you believe since before you could read that that was the right thing to do if you happened to be a woman.

Therefore seeing this ad campaign surprised me because I knew that the current Dutch government was a big fan of the “cultural relativism” which leads to accepting the discrimination of women in the muslim culture because not accepting it would be make many muslims very angry. Insulting Islam is now a criminal offense here and we must let it insult us. So I thought, cool, the guys up there are changing their mind !

How naive I was. I went on their website ( discriminatie.nl/ ) and what I read there was in the continuity of this politically correct speech. They’re overdoing it since Geert Wilders’ result at the European elections I guess… (and no, I don’t vote for wilders).

(videos added by me)

It is not the first time such a campaign evokes that type of negative comments. It also happened in a similar campaign in which the Dutch province Overijssel has a picture of a girl (actually living in that province) with a headscarf saying ‘See, the landscape (referring to the ‘typical’ Overijssel landscape) is in you’. Also in commercial campaigns pictures of woman with headscarves sometimes appear. The last one of course an attempt to reach out to a ‘Muslim market’ but as such also an attempt to normalize Muslims and include them in the community of consumers, or in the case of Overijssel include them in the moral community of the people of Overijssel (contrary to treating them as outsiders). Previously I have blogged about those campaigns and the (negative) reactions:
C L O S E R » Blog Archive » The power of images – Muslima ads

In both cases this might lead to a normalization of Muslims in the public landscape and I think a lot of the complaints against the campaigns are complaints against the normalization of Muslims in the public landscape. Some people don’t want Muslims or Islam to be part of the Dutch culture. Muslims do feature in public campaigns for a long time now but usually related to some exotic (halal) product or to some campaign related to integration of migrants or campaigns designed to promote social cohesion and public safety. The fact that they now appear in other type of (commercial) ads might indeed lead to further normalization.

Although these campaigns are not all of the same they do share some of the ambiguity MMW also refers to:
Hide No More: Dutch Ad Campaign Targets Discrimination Against Hijabis « Muslimah Media Watch

The one critique I do have with the ad is that it can be ambiguous, as described in the introductory paragraph of the Flickr post. The ambiguity that can occur looking at the ad for the first time could lead some people to come away with the wrong message such as the idea that hijab is preventing the woman from being herself. This would obviously negate the actual intent of the ad. Still, it is a great ad and positive image of hijabis that is very welcomed.

And both the reaction of MMW and on the Flickr site actually prove that ambiguity and it can also be found on some of the Islam sites in the Netherlands (see Ontdekislam – Dutch). I think it is very difficult to avoid such ambiguity unless you want to be very moralistic which would, I’m afraid, have a very negative effect and provoke even more negative remarks about this multiculti campaign. The ambiguity of course leads to people having different ideas about the interpretation of the campaign, but may also lead to debates as to how interpret it. That could be worth much more than a simple morally clear to do and to don’t list.

Moreover both the campaign text celebrating and stimulating the self image of the Dutch as tolerant and the critique on the campaign by ‘islam-rejectionists’ (for lack of a better word) belong together since they make clear that the Netherlands is in fact not as tolerant as some of wish but that it is also not a place solely occupied by ‘islam-rejectionists’. In a recent PhD study Jacomijn Hofstra (Groningen University) focuses on the perspective of Dutch majority members on immigrants’ acculturation. More precisely, their attitude towards acculturation strategies (integration, assimilation, separation and marginalization) of immigrants is studied. Additionally, the influence of attachment styles on majority members’ attitudes towards these acculturation strategies is examined.
Attaching cultures. The role of attachment styles in explaining majority members’ acculturation attitudes < Home RUG < Rijksuniversiteit Groningen

The data showed that, irrespective of the method of measurement, the phase of life of the respondent, or the cultural background of the immigrant, Dutch majority members prefer immigrants who use the integration strategy (characterized by cultural maintenance and positive relations with the host society), followed by the assimilation, separation and marginalization strategy. Furthermore, people scoring high on secure attachment (characterized by a constructive attitude towards the self and towards others) are more positive about the integrating immigrant. In contrast, the insecure styles (fearful, dismissing, and preoccupied) were either negatively or not related to the attitude towards integration. These styles correlated more strongly with the three other -less beneficial- acculturation strategies.

So, improving people’s level of secure attachment, might lead to a ‘truly’ culturally diverse society which guarantees a safe environment at schools, at work and in neighbourhoods for people with different cultural backgrounds.

At the same time the high scores of ‘islam-rejectionist’ Wilders shows that the ‘islamic issue’ is deeply dividing Dutch society and in a response to that tries to re-invent Dutch identity and with that the notion of tolerance.
The commercial campaigns and the campaign of Overijssel try, as said above, to re-establish the notion of tolerance and to include Muslims in the moral community. This however should not blind us to the fact that tolerance towards Muslims (or others) does not erase oppressive structures in society, the widespread idea that Muslims are still strangers in our midst (after 40 years), or that Muslims are discriminated against or that a secular (or at most a Christian) way of life is the normal way of life and everything else religious is irrational or even dangerous, that our Islam debate is sometimes so vile that some Muslims truly are afraid they will be forced to leave the country sooner or later (sometimes referring to Hirsi Ali as someone who embodied the Dutch ideal of integration, was succesful in her own way but nevertheless stripped of her Dutch identity). In that way the campaign of Discriminatie.nl that is also a complaints office is a step in the right direction. The problem however with these offices is that they do not really seem to work very well. The Amsterdam complaints office for example hears a lot of Moroccan-Dutch youth complaining about discrimination by secondary vocational school (saying that are raising barriers against Moroccan-Dutch youth) but there are no offical complaints (Source Dutch). One of the reasons probably is that these offices are very bureaucratic.

To end this blog, I would like to note (as MMW also makes clear) the campaign is not only about Muslim women who may be discriminated but the whole campaign is aimed against discrimination of gays, women, the handicapped and blacks (migrants). Look at the video belonging to the campaign:
[flashvideo filename=http://www.youtube.com/watch?v=PJ3A7DyPYnE /]