Nadir Bouhmouch, a 22-year-old film student in the US, was determined to shoot a documentary during his summer vacation in Morocco. The suicide of the 16-year-old Amina Filali from Larache, who presumably was forced to marry her rapist, gave him the idea to use her story as the main topic for a documentary about women’s rights in his country of birth. He named the film 475 – When Marriage Becomes Punishment, with 475 referring to the article of the Moroccan penal code that made Filali’s marriage possible.

Bouhmouch released the film online on 21 February this year, in commemoration of another Moroccan woman: on 21 February 2011 Fadoua Laroui set herself on fire after she was excluded from a social housing scheme as a single mother. He also chose February because in that month the 20 February Movement, a Moroccan movement that organises demonstrations for democracy, marked its second anniversary.

As a way to protest he didn’t ask the Moroccan authorities for permission to make the documentary. “We didn’t want any permission”, he says. By ‘we’ he is referring to the members of Guerrilla Cinema, a collective of young Moroccan film makers who want to make films without censorship. “To make films without permission is a form of civil disobedience. This is a protest against the government’s regulation of films. We didn’t want to be endorsed by something we don’t believe in.”

For Bouhmouch and his crew the obstacles were limited to a few questionings by local judges and a wali (regional governor) who allowed the film makers to film because they were students. Sometimes it’s obvious the film was made by students lacking expensive professional material. “That was to not attract any attention. It’s a clandestine way of making films at Guerrilla Cinema: not always with a big stick with a microphone, no big camera and no interviews in public. We minimised our crew and that has aesthetic and technical consequences.” 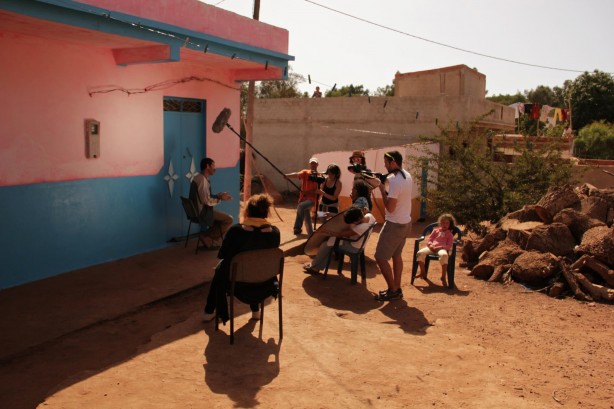 The film crew during an interview with the father of Amina Filali in Larache, August 2012. © Hamza Mahfoudi

The idea for the documentary came a year ago when Moroccan activists started a discussion in Morocco about women’s rights and the unjust laws. “I didn’t even know such a law existed, or at least not in the way media presented it, because it sounded very barbaric.” Based on article 475 of the Moroccan penal code a rapist could avoid punishment if he would marry his victim. Could, because in January 2013 the minister of Justice announced plans to change this law.

When watching the film it soon becomes clear there are different versions to Filali’s story. “We don’t know what exactly happened either”, Bouhmouch says. “The media presented a typical orientalist story of a Muslim girl who became a victim of what is illustrated as a barbaric culture. We discovered that there were different stories. I think Amina had a relationship, but got raped while she was in that relationship. The Moroccan government doesn’t recognise rape within a relationship or marriage. We discovered a very complex story and that is what the media missed.” Bouhmouch concludes further that Amina’s family wanted a marriage after her relationship became public, and that her rapist’s parents didn’t want a daughter-in-law who lost her virginity. “So her parents brought the case to court to force them to get married. For girls like Amina in that situation there is no other option but to agree.”

In his film Bouhmouch shows a second story: that of the second wife of Amina Filali’s father. This woman reveals how her husband is making her life hell with abuse. This story sharply contrasts with her husband declaring in front of the camera how he mourns his daughter’s fate and wishes no woman would be treated like that. “His attitude resembles that of the Moroccan government. It is extremely patriarchal: it discriminates women in its own country but then talks about how it fights inequality in international fora”, Bouhmouch explains.

‘It’s not your fault’

But for the film crew the goal of the documentary was not to change the law, but to restart a discussion about feminism. Bouhmouch: “I don’t want to tell people what to think of the case. I am a man too and have been exposed to a patriarchal society in both Morocco and the United States, so I also have this type of mindset.” The women in his crew reminded him of this. “Working with Houda Lamqaddam was great”, he says. Lamqaddam, 21 years old and a student in computer science and communication, became a rape victim when she was 17. She is a co-producer and narrator of 475 – When Marriage Becomes Punishment.

Last year when many Moroccans were discussing the death of Amina Filali and women’s rights online, Lamqaddam wrote on her blog about her experience as a rape victim. “I wanted to enter into the debate with my voice. I wanted to say to people that they should stop with the way they talk about rape victims. It was all about ‘how they feel’ and ‘what they should do’. For once I wanted to speak out myself.” On her blog she called on other girls and women to not hesitate to file a complaint if they were raped. ‘It’s not your fault’, she reassured them. She also wrote about how her family supported her all along. “Online I also received support after writing my story, but it felt so unfair: this support should go to a lot more women.” 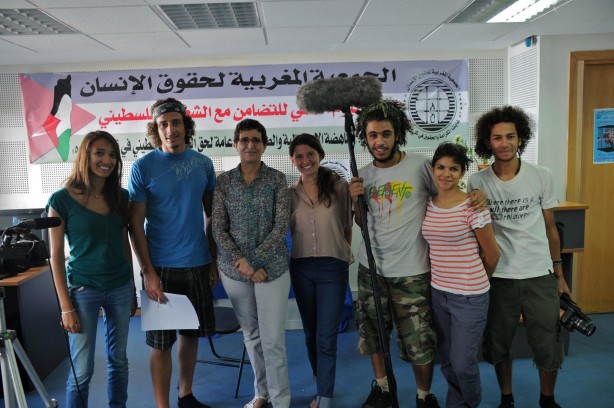 It is Lamqaddam with whom the second wife of Amina Filali’s father shares her story in the film. “That was heartbreaking”, says Lamqaddam. “First because she told us a story no one had asked about. There were journalists and activists who went to talk with Amina Filali’s family and neighbours, but as a second wife she stayed in the background. She came to us herself. We were there with three people who had inferior filming equipment and an Iphone while the rest of the crew was elsewhere. She spoke, we recorded, and it felt as if there was nothing we could do for her.” Now this second wife is in contact with women’s organisations who could help her get a divorce.

The 18-year-old Layla Belmahi, another co-producer of 475 – When Marriage Becomes Punishment, also thinks the situation of Moroccan women deserves more attention. Belmahi is the founder of Woman Choufouch, the Moroccan version of the SlutWalk that denounces sexual harassment in the streets of Morocco. “Moroccan verbal harassment often start with the expression ‘Woman choufouch?’ (‘Can’t we even look?’)”, she explains. “We don’t just want media attention when a rape victim dies.” According to Belmahi Moroccan media and institutions make the work of women’s organisations unnecessarily difficult. “When an association wants a campaign on television, it has to pay the same airtime fee companies pay.” Until now Belmahi didn’t organise a demonstration against street harassment, but she and her supporters did participate with other associations in a sit-in for victims like Amina Filali.

Woman Choufouch, Guerrilla Cinema and the 20 February Movement have in common that they are led by the young generation of Moroccans who demand respect for human rights. Belmahi: “Activists are the most sensitive people in a society. They are the first to notice problems, to understand where they come from and to have the courage to denounce them.” Lamqaddam’s experience brings in a nuance. She noticed this kind of activists, too, sometimes see feminism as a luxury. “This even goes for some of my friends in the 20 February Movement who describe themselves as human rights activists or anarchists. If you talk with them about men and women, it’s still about the same gender roles. The way they talk about female politicians is embarrassing. For example, they nicknamed Nabila Mounib, who is the head of the socialist political party PSU, milf. That stands for mother I’d like to fuck. That’s how they describe attractive older women. This is something universal. Everytime I try to say something about this I’m the ‘hysterical feminist with no sense of humor’.”

That this mentality exists within the 20 February Movement troubles Lamqaddam. “The last thing we need is another structure that calls itself independent, free and positive and at the same time brings oppression with it.”

To watch the English version of the film:

Hasna Ankal is editor of al.arte.magazine, journalist at Belgian newspaper Het Belang van Limburg, and a member of the Flemish youth press agency StampMedia. She writes about Islam, Amazigh culture, feminism, and Morocco. She wrote this piece for al. arte.magazine (Dutch and English) It is re-published here with permission of the author and al.arte.magazine. The photo’s have been used with kind permission of Nadir Bouhmouch.

One thought on “Marriage as punishment: documentary about women’s rights in Morocco”