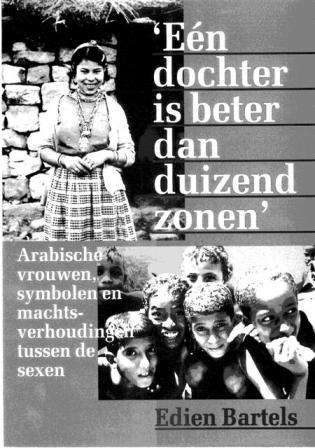 This volume, made up of a collection of related articles, focuses upon three issues: how Arabic women experience the balance of power between the sexes, how they express these experiences in symbols, and which symbolic strategies they devise to deal with the differences in power. It is based on field work conducted between 1976 and 1991 in three locations: rural Tunisia, Morocco and in the Netherlands among migrant Moroccan women. Part 1 (‘Women, symbolism and strategy’) describes the research process (Chapter 2) and the theoretical framework for the study (Chapter 1). The theoretical exercise is based on two choices made during field work. The first important decision was to focus on women’s vision of the balance of power. This choice is based on the supposition that Arabic women are not passive victims of suppression, but acting individuals capable of developing their own vision of reality and asserting it. This conception appears self-evident – most anthropologists would characterize Arabic men in a similar vein. Discussions in scientific literature demonstrate, however, that the idea is not yet clear for Arabic women. In contrast to many studies, it is not my intention to refute the current stereotypes and ‘prove’ that Arabic women are in fact similar to the rest of mankind.

As women occupy a different social position than men, one can generally distinguish a women’s and a men’s perspective on society. Whether various groups of women have their own visions of reality is the subject of much research: in this study I elaborate on the specific viewpoints of Arabic village women.

The second part of the book, titled ‘Women and Men’, investigates the varying perspectives of Tunisian women and men. Chapter three (‘The boy’s mother resembles a fish bone’) describes how I was confronted with differences in vision between women and men during my field work, and later tried to interpret these theoretically. A theoretical foundation hinging on the concept of subculture is provided in Chapter 4, called ‘Women’s perspective and men’s perspective: a useful distinction?’ Thesubcultural perspective offers the opportunity to determine the visions of men and women separately, and also explore the relationship between both sexes in a broader cultural framework. In addition, it concretizes the proposition that a women’s vision can only be spoken of if there is structural coherence between their various notions and ideas.

The second important decision I made was to choose symbolism as a tool to order the chaos inherent to field material. For the reconstruction of the substance of women’s vision I lean on Eickelman (1976), who distinguishes perspectives in symbolism on two different levels. Eickelman first demarcates a ‘common-sense perspective’, which resides at what I call the subcultural level. I use this concept to reconstruct the experiences of women as a social category. Secondly, Eickelman distinguishes a ‘religious perspective’ at a higher level of analysis. I consider this as an inclusive cultural framework with elements from both the women’s and the men’s perspective. In order to reconstruct women’s vision I do not take the symbolism of women at the subcultural level but the broader cultural context as a point of departure. Part 3, titled ‘Women and saints’, looks into an item of symbolism wielded both by men and women: saints. According to Turner, saints are a dominant symbol with high durability and consistency within the whole symbolic system. They are fixed points in social as well as cultural structures and function as links between the two (Turner 1967: 31-32). Saints also act as connecting symbols between various subcultures as well as between subcultures and the enveloping cultural structure.

Chapter 5 (‘A village saint as binding agenf) demonstrates that women are not passive victims, and that they do not only move about in a female world. Women live in a village community and actively intercede in the lives of both men and women. They are also able to play an important role in political conflicts which apparently do not involve them at all, by manipulating symbolic conceptions and practices. The argument in this chapter is that reality does not accommodate a ‘submissive women’s culture’ and a ‘dominant men’s culture’, but two subcultures with subcultural differences. However strong sex segregation may appear to be, there is always a more inclusive cultural framework containing influences from the two subcultures.

In Chapter 6 (‘The two faces of saints in the Maghreb’) I commence with the more general cultural context and subsequently reconstruct a women’s and a men’s perspective on saints. Saints form a gender-related symbol employed by men and women alike. I demonstrate that its polysemic character allows for confirmations of and protest against gender representations and relations simultaneously. This is the reason women are able to identify with symbolic representations which, in the first instance, appear to belong to the dominant men’s perspective. Further examination also indicates that women in North Africa have what Ahmed (1982: 167-168) calls a ‘native tradition of feminism’, which is not the result of contact with the West. Analyses of the perceptions and rituals of the veneration of saints indicate that equality in gender relations is of great importance to women.

Part 4 (‘Women and children’) is devoted to an exploration of women’s vision at the subcultural level. As village men and women in Tunisia and Morocco persistently reduce social differences between the sexes to biological distinctions – fertility, reproduction and related physical characteristics, I focus on motherhood. ‘Motherhood is the fulfilment of a woman’s life’ (cf. Hache-al-Luch 1987), it makes up her identity (‘mere-avant-tout’, cf. Lacoste-Dujardin 1985). Motherhood constitutes woman’s most important power base (‘au royaume des meres’, cf. Boudhiba 1975) but also makes for her submission to the land patrilineal kinship system (‘des meres contre les femmes’, cf. Lacoste-Dujardin 1985). Chapter 7 (‘Virgins and mothers’) contains an overview of perceptions about pregnancy and childbirth among traditional Moroccan women and relates them to their social position. Chapter 8 (‘Young mothers are like cats’) describes spirit possessions and torments of young mothers in rural Tunisia. These conceptions of possession are presented to express the problems young mothers are likely to face, as well as their position within the family and their relationship with the baby. The manner in which rural Tunisian women utilize their symbolic perceptions to ‘adapt to’ or ‘fit in’ maledominated views of the reproductive process is also depicted. Although chapters 7 and 8 are written from the viewpoint of women, they are based on ‘shared concepts’ of fertility, pregnancy, childbirth and the post-delivery period. According to these concepts, male fertility plays the central and dominant role in human reproduction; motherhood mainly develops after childbirth. Men bring this view forward time and time again. In fact these perceptions are used as critical arguments to legitimize the patriarchal and patrilineal nature of society. In Chapter 9 (‘Whose baby is it really?’) the focus shifts back to the women’s perspective. I describe how rural women give their own interpretation to processes of fertility and procreation. The proposition that women are active members of society is elaborated in the fifth and last part of the book (‘Women and strategy’) which considers women’s actions. Although individual women appear to react quite differently to circumstances, patterns may be recognized when the social category is taken as a whole. The discussion goes beyond incidental efforts to achieve a goal, beyond tactics. It looks into the conscious and unconscious reactions of women to the balance of power between the sexes and to the way in which they, proceeding from the women’s perspective, utilize symbolism. Chapter 10 (‘1 can still bear a beating’) is devoted to the way Moroccan migrant women in the Netherlands make strategic use of the cultural concepts of honour, virtue and disgrace in the power relationship with Moroccan men. It is demonstrated that women are able to plot a strategy even in the most threatening circumstances. Chapter 11 (‘Reinfibulation and the battle against women’s circumcision’) describes how women use reinfibulation as a tactic to improve their position in the context of social and economic change. Such cultural notions are employed not only to survive the gender struggle, but also to improve their relative position with men vis-a-vis other women.

Which conclusions are drawn in this study with regard to the scientific and social goals as set out in the first paragraph? In the first place it has become clear that the reconstruction of women’s views on the basis of a subcultural perspective illuminates the cohesion of symbolic conceptions and practices exercised by women. It is shown that symbolic concepts are arranged in two manners: on the one hand there is structural coherence between notions held by women at the subcultural level; on the other hand these are again related to symbolism at the more inclusive cultural level. Eickelman’s approach to symbols proves to be useful. By distinguishing ‘levels’ of representation and action in the symbolism used by Arabic women in rural Tunisia, it is possible to identify differences and construct a hierarchic order. The central perception of gender equality, as reconstructed for the more inclusive cultural level, can also be found in women’s representations at the subcultural level. It is clear that women experience the notions of fertility and reproduction wielded by men to justify their social position as unjust. Village women repeatedly emphasize that they do not feel they should be subordinate.

Secondly, the study demonstrates how women experience the fact that men’s perspective dominates at the inclusive cultural level. It also shows that men’s views are buttressed by ‘assistants’ among women. Notable among these are the traditional midwives. Although midwives are the help and stay of women giving birth, an analysis of symbolic concepts reveals that they are also key figures in the Arabic social order and the hierarchic relationship between the sexes. Whereas older women in their position as mother-in-law can be viewed as ‘sergeants’ of men’s perspective, traditional midwives assist men in disseminating their vision of the process of fertility and procreation. Hereby they confirm the patriarchal and patrilinear structure of society.

Finally, the study proves the validity of supposing that Arabic women do not passively submit to power differentials. An approach in which ‘power’ is characterized as a process of interaction and negotiation is fruitful. By applying symbolism strategically, women try to change the balance of power between the sexes in their favour. The reconstruction of a women’s perspective also has social relevance. Female circumcision and women’s abuse are viewed as some of the worst expressions of male domination. However, well-intended campaigns against these practices are often ethnocentric. Women are not passive victims, even in the case of abuse and circumcision. In combatting these practices the women in question must be involved. This will only be realized if it is based on their own vision and experiences.