‘Barbarians’ – Observations on the fusion between anti-semitism and islamophobia

Recently there is some discussion on whether or not Muslims are the new Jews. There is some merit in the argument for example given the fact that anti-Muslim racist slurs do remind us of similar manifestations against Jews in the 1930s in Europe (Germany in particular). There are a lot of arguments against it as well, not the least that anti-semitism against Jewish people also still exist on high levels throughout Europe.

But what I want to direct your attention to is something else: why does it make sense, for some people, to use anti-semitic and anti-black slogans and symbols (such as the swastika) in a protest against mosques or asylum seekers? See the next picture of a mosque in the city of Haarlem: 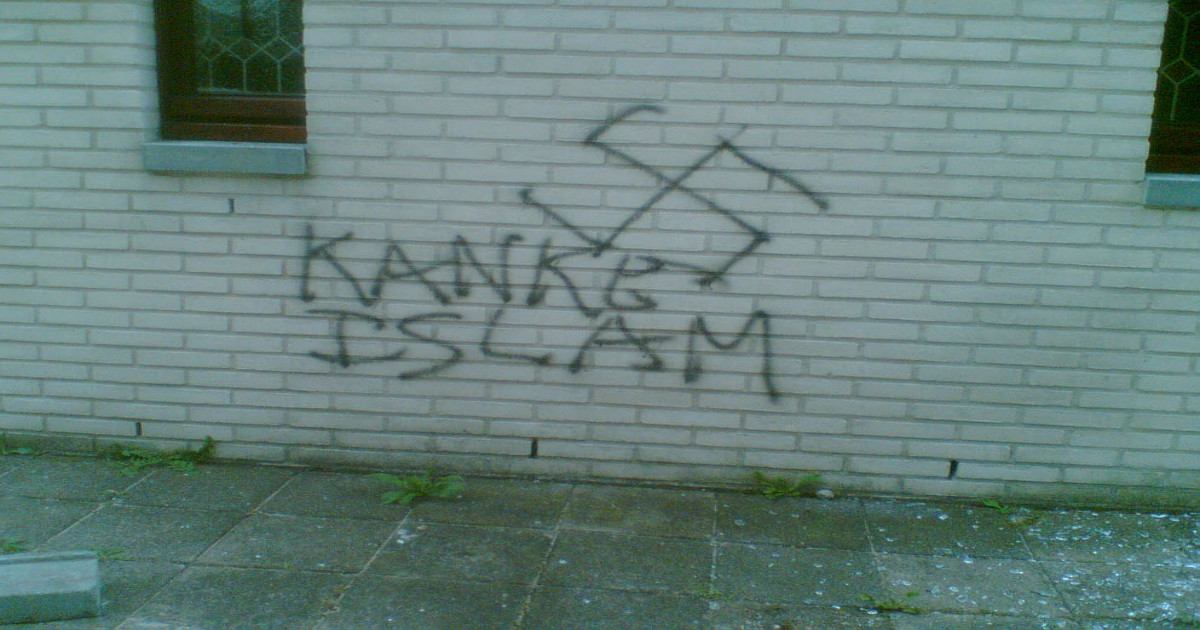 The picture shows a swastika on the walls of a mosque as well as the text ‘cancer Islam’. The next picture is of a Dutch building where an centre for asylum seekers was planned. The walls shows swastikas, ‘white power’, no foreigners and no AZC (asylumseeker centre).

Muslims and Jews as the enemies of Europe
Of course historically, Jews and Muslims have a common history in relation to Europe. The Muslims were (and are) seen as an external enemy (despite the centuries-old Muslim presence in Europe) and Jews as the enemy within. There is, therefore, an intimate relationship between Jews and Muslims in the process of categorization and dehumanization. But how does this process work in the recent protests against refugees and/or Muslims?

The racism against Muslims is very strong these days, not only exemplified in agressive incidents but also in government policies where ideas about cultural inferiority (or as it is rather put: incompatibility) underpin Dutch integration policies from the start and which are since 9/11 fused with ideas about Muslims and Islam as a threat to people’s security and way of life.

Racialization of Muslims
It does make clear that many manifestations of anti-semitism and anti Muslim racism are not so much based upon what individual Jews and Muslims actually do, but more with imagining them to be fearful barbaric outsiders who are present in society (or are feared of becoming part of society). That for example in the case of asylum seekers certainly not everyone is Muslim is therefore not that important. The racialization of Muslims occurs based upon a particular categorization (foreigners, Jews, Muslims, barbarians, asylum seekers), a specific generalization (based upon a stigmatizing view on ‘race’, culture, religion or a combination thereof), a particular evaluation (barbaric, dangerous, intolerant) and a specific prescription of how they should be or should be treated (closing the borders, imprisoning them, killing them, and so on).

People (women with headscarves in particular), mosques, asylum seekers centres are important in the case of Muslims as targets of hate. Because it is impossible to spot one’s religious convictions in general (what does a Muslim look like?) we have to look at appearances of people and particular landmark buildings for manifesting the fear and hatred. But also because such outward appearances and visible institutions are seen as evidence for the refusal by Muslims to conform with the secular and sexual freedoms that are part of the idealistic imagination of Dutch identity.

The construction of the barbarians
It is likely, I think, since the holocaust is regarded as the ultimate sin of racism, people actually do several things at once when they use such symbols. First of all, some see Islam as new nazism (see also the symbols used by Pegida) so perhaps the swastika refers to that. Secondly, although they probably would say ‘I’m not a racist, but…’ they do hold racist views about everyone viewed as a threatening outsider. For some, given some recent outcries on Facebook, this would be a plea to repeat the holocaust but this time for Muslims. Thirdly, for others the connection with holocaust is being completely delinked from Jews and the Holocaust (and they might even vehemently criticize everyone who pleas for a new holocaust) but they just use it as the most strongest metaphor for ‘outsider I dont want’. In a situation wherein all kinds of Orientalist fantasies about ‘Eastern’ and ‘Western’ masculinity and femininity, the images of IS and the connection being made between Muslims and terrorism contributes then to the new picture of an existential threat by present day barbarians.

One could perhaps argue that nazi symbols are used to denounce Muslims as the ultimate outsider in a way that fits nazi-agenda’s while at the same time many anti-asylum and anti-Islam activists also strongly oppose nazism.