Searching for Silver Linings – Muslims and Copts in Egypt

The terrible violence in Egypt against Christians, Muslim Brotherhood activists and other civilians have shocked many people. And have enraged many people as well. On my Facebook and Twitter accounts, which I use for my research I came across many posts by Dutch Muslims with whom I work, who clearly expressed their anger and frustration about the violence and about the problematic Western media viewpoints about the Muslim Brotherhood and about politicians and opinion leaders who voiced their concern about the attacks against Christians but remained silent about the violence against pro-Morsi people.

But besides this anger there was also something else that, among other things, showed that the situation in Egypt but also the opinions among Muslims are far more complicated and mixed than the simple Egyptian army vs. Muslim Brotherhood framework. There were many people expressing their solidarity with all victims regardless of political, ethnic and religious divides. There was one picture in particular that went viral: 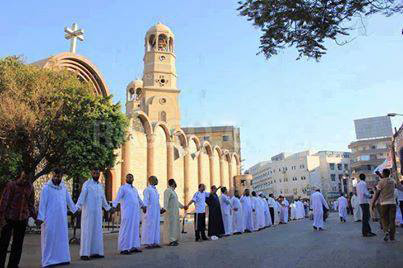 The picture reportedly shows Egyptian Muslims hold hands and form a circle around the St George Church in Sohag suggesting that it is under threat from pro-Morsi militants. It was tweeted by Rev. James Martin, S.J., a Jesuit priest and the author and editor-at-large of America, a national Catholic magazine. He tweeted the image, and it was then retweeted by his followers more than 760 times and made a “favorite” more than 320 times.

It is not clear how old this picture actually is and according to some the church in question was actually attacked. That did not really influence many others (if they thought about it at all) sharing it. It was also picked up by the people I work with on Facebook and shared numerous times with many comments that expressed joy, relief and hope. In a few cases I came across that picture together with others like the following: 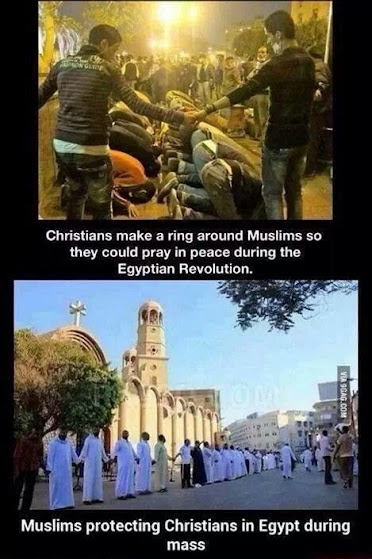 The other picture is from the protests in 2011 when Christians on Tahrir protected the Muslims during prayer. There were several demonstrations of solidarity at that time.

The comments on both pictures showed Muslims and non-Muslims alike expressing their ideas that not all Muslims commit violent acts, it was used to support their ideas that Muslims should protect Christians and that unity and peace were still possible. Pain and anger about the aftermath of the revolution were expressed often through strong emotions. It is part of a process of preserving, promoting and creating (almost in a desperate way) the idea that there is still a sign of good things going on besides all the violence. It is gratifying for people to show their solidarity, their enthusiasm by looking for little signs of hope and it clearly made them feel good about retweeting and sharing it.

Less viral but also shared several times was a picture shared by Ramez Atallah living in Cairo on Facebook: 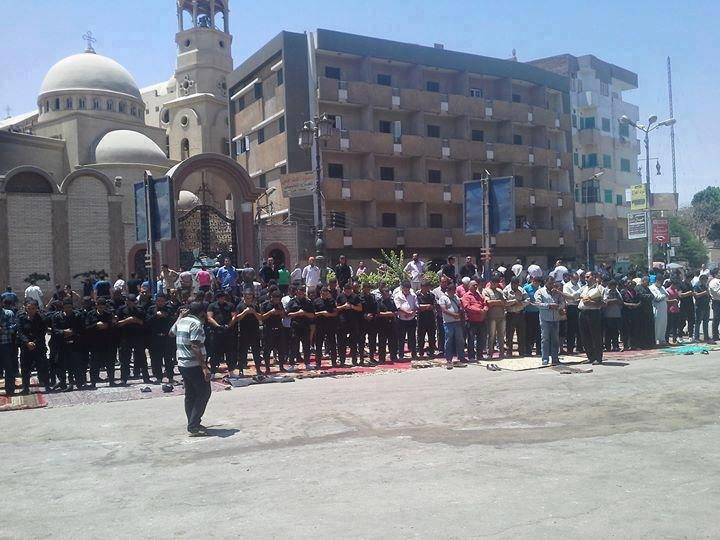 MUSLIMS PROTECTING CHURCHES: this is a moving picture Muslims doing their Friday prayers in front of Church to protect it from attack by militants! This is the Egypt we all dream of.

Also here the context is not really clear but with 72 likes and 1249 shares it is quite popular as well.

Of course, many remained skeptical and angry as well but it is clear that there are many more emotions raging than just those. Such pictures help people to turn their often diffuse and implicit feelings into more plain and simple slogans, personal (sometimes political and/or religious) ideas of good and bad and of belonging. Besides people looking for ways to express their moral anger and injury it is therefore also about people looking for ways to actively engage with what they perceive as good and just in positive ways and searching for signs for peace, tolerance and solidarity as little or obscure they maybe are.

UPDATE:
As I already hinted at above, the St George Church in Sohag that was retweeted so eager as a sign of hope, was indeed attacked. One of my Dutch readers (H/T Jasmina) send me this:

The Dutch text says ‘Here a picture of the mosque of yesterday’ referring to the mosque I showed you above. It indeed has been attacked and set on fire. It doesn’t really matter for the post as it is more about the eagerness and enthusiasm with which people share signs of hope online, I cannot but feel disappointment about the destruction of this church.