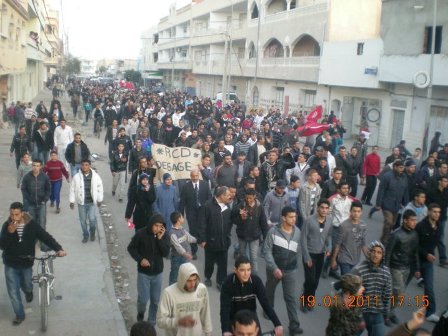 Tunisia is one of my two homelands. Even though born and raised in the Netherlands, I have been feeling more and more Tunisian lately. My father is a Tunisian from M’Saken, a town in the Sahel, near Sousse. Ever since I was a young girl, I have been visiting Tunisia every year during summer holidays. Known in Europe as a warm, Mediterranean holiday paradise, Tunisia is not just that, or maybe even far from that. My parents took us to see the whole country, from the Sahel to Cap Bon, from Carthago to Mahdia. During the four to six weeks spent there every year, my brothers and I got to know the country way beyond its touristic highlights.

I always knew that Tunisia was no paradise. I remember when I was little, I used to wonder why all the men and young boys sitting in the cafes were not at work. No matter what time we passed by – even in the middle of the night – the cafes were always full with men! Little did I know then, that there was no work for them. Luckily my family is relatively well off, but many Tunisians struggle to survive. Because family bonds and social control are strong, people are able to survive, helping each other every way they can. For example, every time we visited one of the sisters of my grandmother, we would bring her food, like a kilo of sugar, bread or meat. Something unheard of in the Netherlands but that is how people get by in Tunisia. 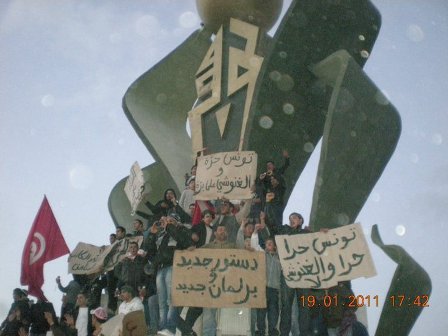 Almost all of my cousins have university degrees, but very few of them have jobs on university level. Some of them endured long visa-application processes or married French-Tunisian girls and have moved to France or Germany, in the hope to build a better live there. Life is hard for many Tunisians; unemployment being one of the biggest problems. But that is not all. As I grew older, I started to become aware of the more ‘subtle’ ways the Tunisian president and its accomplices kept the people in a choke-hold. Repression, censorship, the omnipresence of so-called ‘government informers’, the glorification of Ben Ali in public spaces and the media, the corruption of the regime, expropriation of land, and so on have kept Tunisians silent for 23 years. I have experienced the repression of the old Tunisian regime myself or witnessed it in my surroundings more than once.

One year – it was sometime in the 1990s – my second cousin who is also our neighbour, at that time around 25 years old, was not there to welcome us when we arrived from the Netherlands for our summer holiday. It turned out that he had been arrested and put into jail. Knowing him as a very gentle and smart young man, I was surprised to hear of his arrest. Through the grapevine we heard that he might have been arrested, because he had been hanging out with the ‘wrong’ people. The concept of ‘wrong’ people was used in the 1990s to point out ‘Islamists’ or ‘fundamentalists’ or, in short people who wore a beard. He was imprisoned for more than 3 years, without trial and without his family knowing why he was kept imprisoned. Ben Ali has used the fear of the rise of Islamism as an alibi for arresting people who are allegedly ‘against the regime’. A tactic that worked well. Even my own family, including my father, condoned the repression of so-called ‘fundamentalists’ at that time, because ‘we do not want Tunisia to become like Algeria, where people slaughter each other like lambs’. By feeding into the fear of rising fundamentalism and using Algeria as a horrific example, Ben Ali managed to repress a lot of anti-regime currents in the 1990s.

Another example of repression hit home a little closer: my older brother – a big fan of airplanes and airports – was filming an incoming airplane from a road around one kilometre distant from the airport of Monastir. A car drove up behind us and three men in plain clothes stepped out and claimed to be police men. They took the camera and started to interrogate my brother and father in a pretty aggressive and intimidating way. They took the passports of my father and brother, the camera and ushered us to drive with them to the police station. My father and brother were brought inside, my mom, little brother and I had to wait in the parking lot in the burning sun. We waited for more than 1,5 hours before they finally returned, with their passports and camera, but without the tape, of course. An upsetting experience, because of the degrading way they treated us and the helplessness you feel when they take your passports, and you don’t know whether you will ever get them back. 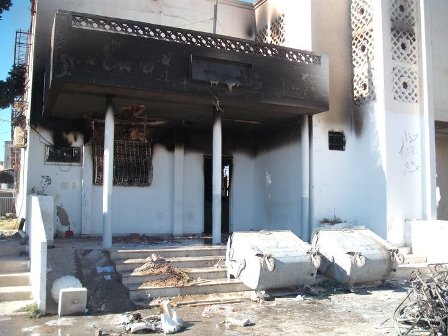 As I write this paragraph my father is in Tunisia. It is his first trip to his homeland since Ben Ali has fled. Egypt has been dominating the media for some weeks now, but that does not mean that developments in Tunisia have come to a full stop. In my father’s first call to me, end of January 2011, he states that in our hometown M’Saken, the police station and the (former) office of Ben Ali’s political party RCD are burnt to the ground (see picture, all pictures taken by Hosni El Gourar). He also reports of the absence of the police, at least in M’Saken and surroundings – a very strange and quite frightening phenomenon. He also tells me that in the area there are robberies going on with deadly endings. Even worse maybe, he reports of Ben Ali supporters who join each other in militias – armed and well! – and try to stir up chaos; an attempt to launch a contra-revolution. The situation is thus far from calm.

In order to secure neighbourhoods, young M’Sakeni’s have volunteered to watch over area’s of the town. Committees of security have been founded. Young men safeguard important feeder roads and patrol the area (see pictures). 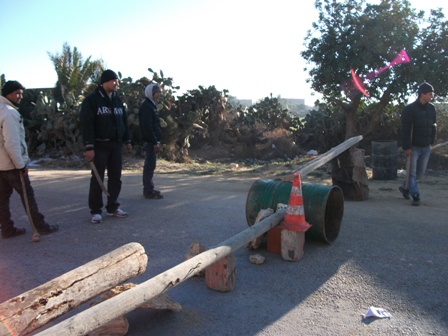 Much to the surprise of many elderly, Tunisian youth have shown the country a new face. Whereas in the past, today’s youth was known as the ‘generation of nothing’, the Jasmin Revolution has turned this image completely around. As perceived by my father, the older generation is confused. Tunisian youth have shown a degree of responsibility that was unheard of. They took action and they changed things. The generation gap seems to have disappeared instantly, says my father. 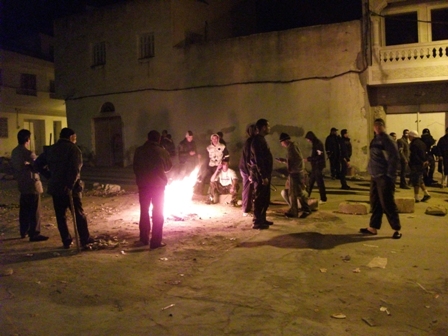 It is now Wednesday February 16, 2011. My father has just returned from Tunisia. His updated report of the current situation in M’Saken and Tunisia confirms my earlier feeling that all is far from stable. The good news, he tells me, is that “the atmosphere is completely different from the last time he was there in November 2010. People are polite, not so edgy, even traffic has become far less stressful. Inter-human relations have improved enormously. Police are nowhere to be found, but, all in all, every day life seems to return to its ‘normal’ status.” But when he continues to tell of his short stay, it appears that Tunisia is not at all ‘back to normal’.

The Ben Ali aftermath: Rumours about endless enrichment
Ever since the departure of Ben Ali, stories and rumours about the enormous corruption of Ben Ali and the Trabelsi’s keep circulating among the Tunisian people. Especially Leila Ben Ali and her Trabelsi family members are hated for their incredible enrichment on expense of the Tunisian people. Leila, a second wife of Ben Ali, used to be a simple hair dresser, roaming around in nightclub circuits, where she supposedly met Ben Ali. Leila Ben Ali is in Tunisia also known as Leila Gin Tonic- what’s in a name?

Some of the remarkable rumours that my father picked up include the story that Ben Ali supposedly had some Roman pillars dating back a couple hundred years before Christ from the Bardo Museum in Tunis (http://www.informatique-tunisie.com/museebardo/) to be converted into wash bins to be put into his own home. Allegedly his wife Leila had very specific and extraordinary demands concerning the furnishing of her bath room. Replica’s of the original pillars were put back into the museum.

Another rumour that goes around on the streets is that some time after 9/11/2001 the United Nations had granted Tunisia a subsidy for the appointment of 150.000 extra police men to prevent and combat terrorism. It is said that only 50.000 police men were installed and that the funding for the rest disappeared into the pockets of one of the Trabelsi’s who was in charge of this project.

The Trabelsi’s are often said to be the real demons behind the regime. Many of Ben Ali’s in-laws were involved in corruption and illegal practices. Some of them have also been arrested in the mean while. It is often said in popular language that “they [the Trabelsi’s] are worse than the Maffia.”

These outrageous stories of how Ben Ali and his in-laws enriched themselves are the constant talk of the town. Whether all of these rumours are true or not, it is taken for a fact that Ben Ali made himself a very wealthy man. Nonetheless, the exact amount of his financial ability is not known yet. The possessions of Ben Ali and the Trabelsi family include houses (in Tunisia and abroad), cars (Ferrari’s and the like), businesses, stocks, gold, and so on. Watch this YouTube clip where two men ‘steal’ one of Ben Ali’s Ferrari’s with a fork lift:

The huge wealth acquired by Ben Ali and his family, illegal or not, is a thorn in the flesh of the Tunisian people.

Tunisia…back to the future
Tunisia remains unstable. Many (young) Tunisians still want to emigrate to Europe. Several hundreds, maybe thousands still arrive regularly at the Italian isle of Lampedusa to try to enter Europe. Even though press and media present this as something new, it is not. Tunisians were fleeing the country also way before Ben Ali left. What will happen in the near future remains difficult to predict. In prospect of the elections in September 2011, people are trying to get back to business as usual. Ironically, ‘business’ is what Tunisia lacks: meaning work and especially work deriving from tourism. Work and freedom of speech and expression, that is all that Tunisian youth want. It is a simple request. But not easily achieved for a country where more than half of the population consists of people under 25 years old. Tunisia’s new government will hopefully find a way to give new impulses to the economy, with help of Europe and the United States. But most importantly: tourists must come back to Tunisia as soon as possible. Maybe then paradise will move a little closer to Tunisia.

Thanks to Hosni El Gourar from M´Saken, Tunisia for the pictures.

Dr. Miriam Gazzah is a postdoctoral fellow at the Amsterdam Institute for Social Science Research (AISSR) at the University of Amsterdam. She is currently working within the research project: Islamic cultural practices and performances: The emergence of new youth cultures in Europe.
Read more about this research project here: http://home.medewerker.uva.nl/m.gazzah/
Visit Miriam Gazzah’s personal website and blog: http://www.miriamgazzah.nl

One thought on “Tunisia: from paradise to hell and back?”